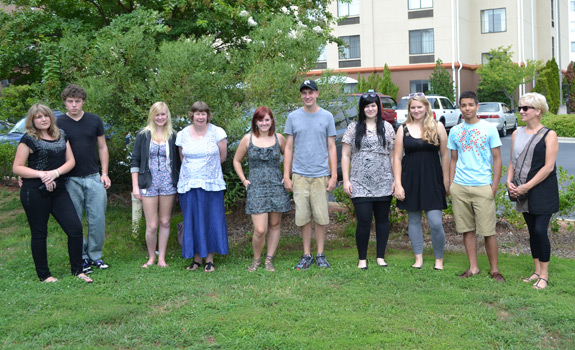 The lucky fans spoke to Hollywood Crush regarding their set visit. Although it’s understandable that they couldn’t say too much about their experiences at ‘The Hunger Games’ set, it’s still great to read about how nice the cast and staff on set were to them.

Alexander Swenson (USA):
Upon arriving to “The Hunger Games” set, ideas about what part of the “Hunger Games” world I was going to see kept swirling through my head. Would I be part of the group sending Katniss off to her death? Or building up my strength in the Training Center with the other tributes? Would I be escorted into the confines of the Capitol for the first time like Katniss did after her departure from District 12? Or staring up at the Cornucopia, juggling my options of whether to run or fight for supplies, all while the countdown strikes down to zero. Honestly, I had no idea what to expect. All I knew was that I was excited.

To say that I was amazed would be an understatement; I was more than just amazed, I was stunned. We got a glimpse and a behind-the-scenes view of several set locations, which included the Gamemakers’ Headquarters and the Districts, and a full tour of the Training Center. It was remarkable how something I read several months earlier on paper could be translated into reality. I remember talking with several of the actors and how they said the Training Center “was their playground” and on their first day, how they “spent a majority of the day just climbing around and checking it out.” It was truly fascinating.

All the actors were very friendly. Even the director, Gary Ross, came over and gave us a huge welcome. A majority of the cast stayed around with us when they weren’t filming and made sure to point out all the cool stuff that they’ve become accustomed to. I feel like I know almost every nook and cranny of the Training Center thanks to them! They made us feel like an honorary member of the cast for the day.

When I saw the trailer for the first time, I was astonished. I probably watched it enough times to make my computer want to give out and never turn back on again. Right now and in the future, every time I watch the trailer, see the movie, and beyond, I can say that I met those actors, talked with them, and experienced their lives. I can tell people that I was at the Training Center and stood in the center, that I saw the set of the Districts and the Gamemakers’ Headquarters, and that I experienced, first hand, the “Hunger Games” world. I can shout out to everyone that the odds were definitely in my favor!

Sam Solomon (Canada):
The trip was an experience of a lifetime! It was inspiring to see the positive atmosphere Gary Ross created.

My favourite thing about the trip was that the young actors we met were all so welcoming and friendly; it was impossible not to get along with them.

Ever since I watched the trailer, I can hardly contain myself; it looks incredible! It reveals a perfect amount for fans of the book because it doesn’t show the “how will they do that” parts like the flaming entrance dress, but they showed little, interesting things, like the hovercrafts and Rue’s song.

I was worried that it would be tough to describe what the Games were, but the trailer does it perfectly for anyone who hasn’t read the books!

You can read the rest of the interview over at Hollywood Crush. 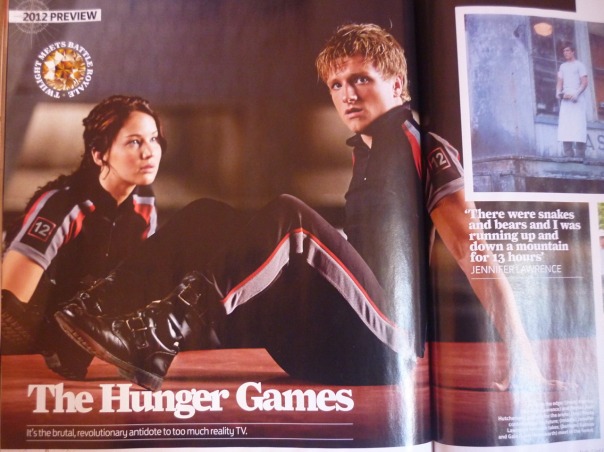 According to emma–jane, this new still was taken from Total Film magazine February 2012 issue #189. This issue in available in Kinokuniya at S$14.70 each. 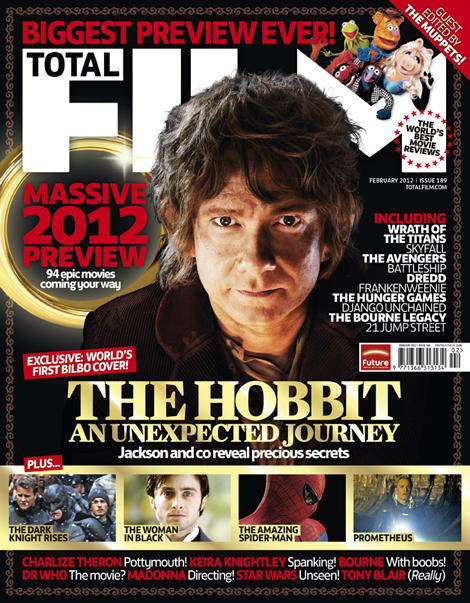 Many thanks to Rebecca for telling us where the magazine scan originated.