The Straits Times: ‘The Hunger Games’ Is Creating Strong Buzz Ahead Of Its Release

We had shared a part of The Straits Times article regarding ‘The Hunger Games’ triumph against ‘Twilight’ in Next Movie’s Most Anticipated Movie in 2012 poll on our Twitter and Hunger Games Singapore Facebook page respectively. However, in order to read the full article, the person would have to login or subscribe to The Straits Times.

Many thanks to our readers, @rebeccaeeyueeyu and Genevieve, we have a scanned copy of the article in the 30 December 2011 issue of The Straits Times.

Thank you so much to @rebeccaeeyueeyu and Genevieve for the tip!

If you have spotted any ‘The Hunger Games’ related news or sightings in Singapore which we haven’t reported about, feel free to send us a tip at hungergamessingapore@gmail.com! Don’t forget to follow us on Twitter (@HungerGamesSG) as well as ‘Like’ us on Facebook for the latest updates!

Posted in Seen In Singapore, The Hunger Games Movie

The whole world will be watching “The Hunger Games” indeed! Hunger Games fans had voted vigorously during voting period and eventually beaten out other hot favorites such as ‘The Twilight Saga: Breaking Dawn – Part 1’, ‘The Dark Knight Rises’, ‘The Amazing Spider-Man’, ‘The Avengers’, ‘The Hobbit: An Unexpected Journey’ and ‘Snow White and the Huntsman’. Movies such as ‘Prometheus’, ‘Skyfall’ and ‘Dark Shadows’ were also in the running.

Here’s what MTV has to say:

In one of the bigger upsets of these end-of-year polls, Katniss KO’d Bella (Batman, Spider-Man and Snow White, too). Not bad work for a character who hasn’t even been seen on the big screen yet. The approaching year is easily the most exciting in recent memory; when “The Hobbit,” “The Amazing Spider-Man” and a new Bond film don’t even crack the top three you know 2012 is shaping up to be a cinematic year for the ages. What’s more, the “Hunger Games” win has got to come as welcome news to Lionsgate as the studio prepares to launch a new YA-adapted franchise the same year as the “Twilight Saga” finishes up its box-office run. — E.D.

We are sure Lionsgate will be delighted to hear there’s such a overwhelming support for ‘The Hunger Games’ even though this is the first movie yet to be released!

We had reported previously that Cathay Cineplexes will be released on 23 March 2012. What does this means for Hunger Games fans in Singapore? Could it be that we will be able to watch it earlier than fans in United States of America?

We are trying to get a confirmation from Cathay Cineplexes at the moment to ensure this is not a typo. So hold on your horses and keep your fingers crossed! 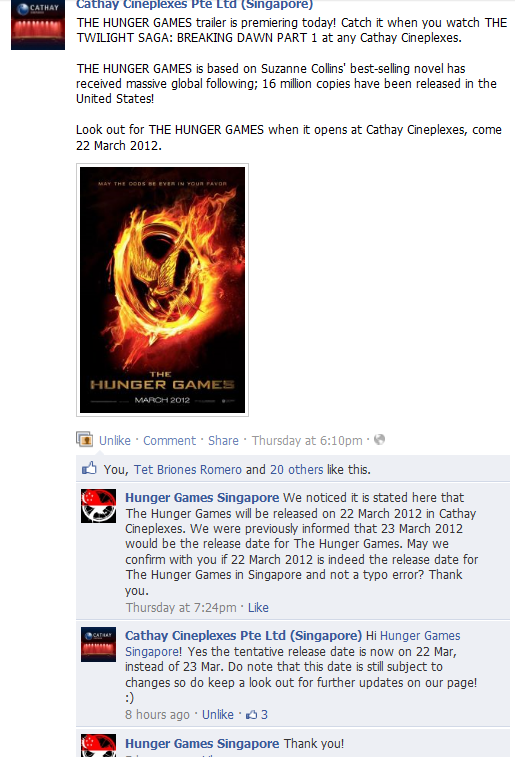 Many thanks to fellow Hunger Games fan Ummehani N S for this tip!