It has been a busy day for The Hunger Games fans and media alike. Following the reveal of the latest Entertainment Weekly issue with Katniss Everdeen (Jennifer Lawrence) and Finnick Odair (Sam Claflin) on the cover and a “The Hunger Games: Catching Fire” movie still where Finnick gets uncomfortably close to Katniss, we have not one, not two, but FIVE new stills for you to look at. 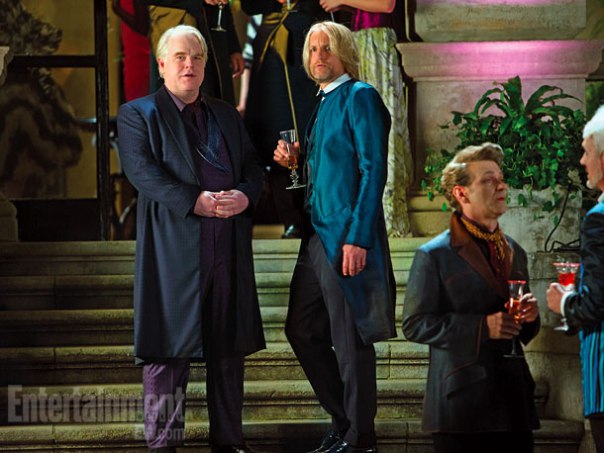 Below: President Coriolanus Snow (Donald Sutherland) all dressed up presumably Capitol Feast in his mansion 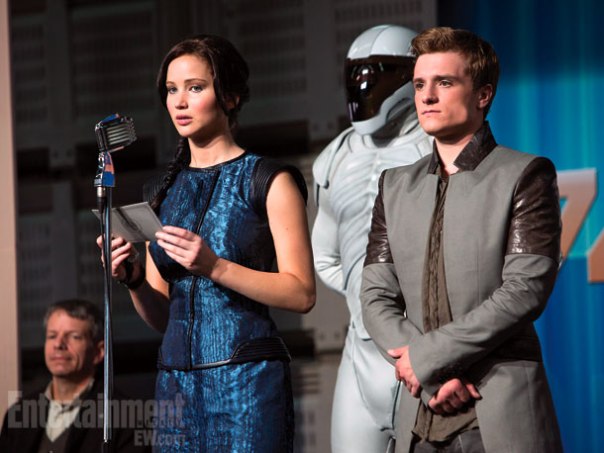 ”These are kids growing up in war who physically, emotionally can’t love somebody,” says Jennifer Lawrence about the uncomfortable triangle between District 12’s battle-weary Katniss, Peeta, and her childhood friend Gale that began in The Hunger Games. ”Katniss thinks she can’t have a crush on a boy because she’s worried about survival every single day. And she can’t be a normal 16-year-old meeting her friend out in the woods and practicing kissing because that’s not the world that they live in.”

”Jen and Liam have amazing chemistry,” says director Francis Lawrence of his young stars. ”They have a nice moment right before Katniss is reaped that is the very first thing we shot. And then when Gale has been brought in from the whipping, that’s another really nice moment they have alone.” ”This is the book where you have to understand the pull Katniss feels to both Peeta and Gale,” say producer Nina Jacobson.

What do you think of the five new stills?

This issue of EW will hit newsstands in US on January 11, 2013 and is expected to be available in major newsstands and bookstores such as Kinokuniya by this weekend.

Photos are taken from Tumblr and Entertainment Weekly via Victors’ Village. Hunger Games Singapore do not own any of these photos.